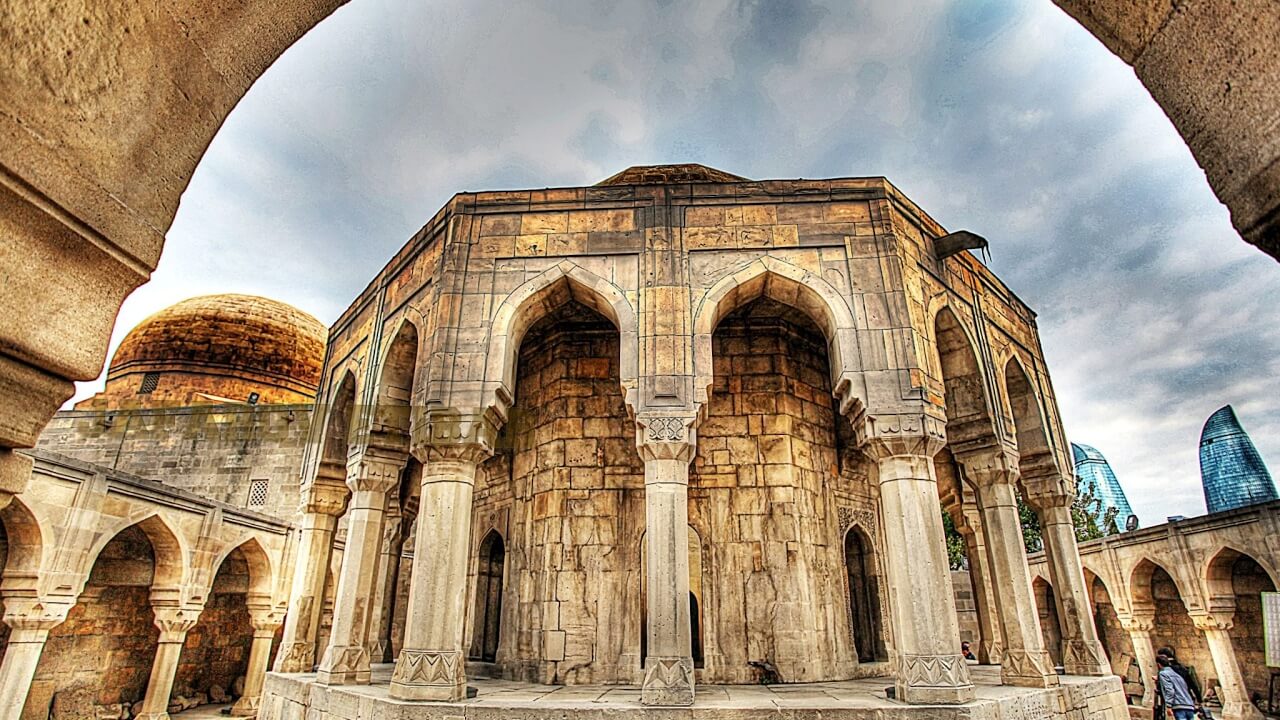 Azerbaijan has a unique landscape due to various climatic zones: mountains, semi-arid plains infinitely stretching to the horizon, forests, hot subtropics and ancient cities. Wildlife, fire and kilometers of coastline are enough to enjoy of the real beauty of Azerbaijan. We have our wrap-up of the most beautiful places in the “Land of Fire” for you. The climate formation in the country is influenced by the cold Arctic air masses of the Scandinavian anticyclone, the temperate air masses of the Siberian anticyclone and the Central Asian anticyclone. A diverse landscape affects how air masses penetrate the country. The Greater Caucasus protects the country from direct influence of cold air masses coming from the north, which leads to the formation of a subtropical climate on most foothills and plains of the country. And withal plains and foothills are characterized by high rates of solar radiation.

The Azerbaijanis, which have a mixed ethnicity originating from the indigenous people of eastern Transcaucasia and the medians of northern Persia, are in many ways Euroasian and bicultural due to Russian-Soviet and Eastern European influence. The modern Azerbaijani culture is rich in achievements in such areas of art as music, literature, carpet weaving.

Food from different cultures influenced Azerbaijani cuisine. Thanks to this, it is very diverse, but also authentic and differs from the cuisine of other countries. For Azerbaijanis, food is an important part of the country’s culture and is closely connected with the history, traditions and values ​​of the people. The diversity of climatic zones and soils contributes to the diversity of products (9 climatic zones from the existing 11). Fresh herbs, including mint, coriander, dill, basil, parsley, tarragon, leeks, leeks, thyme, marjoram, green onions and watercress are very popular and are often placed in main dishes. There are many edible fish species in the Caspian Sea, including sturgeon, Caspian salmon, Kutum, sardines, gray mullet and others. Black caviar from the Caspian Sea is one of the most famous delicacies of Azerbaijan!

In summer, the capital Baku has a temperature of up to 35 degrees Celsius. During winter visits, you rarely see temperatures drop below 5 ° C. But it’s worth remembering that many parts of the country are snowing, especially higher up in the mountains. In Gabala, in the mountain resort of Tufandag, after December 15, begins skiing and snowboarding. The snow starts to fall in mid-November.

The city of Baku is actually quite diverse even though it may not appear so at first. The history of the country is extremely interesting and sheds light on where diversity exists in Azerbaijan today. We will not go into details about the history, just think that the city is home to many people from other CIS, Iran and Gulf Coast countries. In addition, many American and British expats currently call Baku their home.  Baku will certainly be on your route on a trip to Azerbaijan and it is great to see the whole mix of people of the country in one city.

Carpet weaving in Azerbaijan dates back to ancient times. Azerbaijani carpets are among the most valuable in the world. Family traditions and techniques are passed down from generation to the next by word of mouth. In Azerbaijani carpet weaving, wool is most often used, and a combination of green, red, yellow, cream and blue, which form complex motifs and patterns,, each of which is unique and has its own history. There are seven carpet producing regions in Azerbaijan in nowadays.

After the collapse of the USSR, Azerbaijan began to develop actively in the oil segment. The country transformed, many international companies, shops and catering enterprises have opened. Since the country’s economy is very tied to the price of oil, the oil crisis has had an impact on the exchange rate of the Azerbaijani manat and it has become profitable for tourism. Due to the depreciation of the manat, which affects the price reduction, tourism in Azerbaijan has become even more affordable. Daily travel expenses rarely exceed $ 60, including accommodation, food and drink, entrance fees, and entertainment.

Despite periods of foreign occupation, the Azerbaijanis worked hard to preserve their culture and national identity. Historically, there is influence from Russia and Persia, especially in architecture and painting. The country also has a rich literary tradition. Painting also flourishes here, from ecclesiastical to modern styles. You will see some bizarre works by local artists and sculptors all over Baku.

Hospitality in Azerbaijan is an ancient tradition, revealing the culture and spirit of the world in which the Azerbaijani people live. These customs tell us a lot about the people living on this earth and their potential. Alexander Dumas wrote about Azerbaijani hospitality, as well as about the Caucasian people: “if you knock on any door in Azerbaijan or somewhere in the Caucasus, you say that you are a foreigner and you have nowhere to sleep, the landlord will immediately provide you with his largest room. He “and his family will move into a small room. Moreover, during the week, two weeks, or month that you stay in his house, he will take care of you and will not allow you to need anything.”

Azerbaijan has a great history – both ancient and modern – is exposed right in front of your eyes. The ruins of thousand-year-old buildings and living mosques that date back to the Middle Ages are among the crumbling Soviet remains. More than enough monuments of 10-11 centuries can be counted in The Old Town. The whole Old City is a UNESCO Heritage site.

In addition to historical and cultural monuments, Azerbaijan also has natural wonders that are worth to visit. Almost every tourist who arrives in Baku visits mud volcanoes located near the Gobustan area. More than a third of the world’s mud volcanoes are located along the Absheron Peninsula. Mud or sedimentary volcanoes by their technical name emit jets of mud after pockets of underground gas create pressure, causing it to surface. Azerbaijani Turagay and Beyuk Hanizadag are among the largest in the world at an altitude of 700 meters. Volcanoes tend to bubble slowly, causing the sides to build up over time.

The architecture in Azerbaijan is quite diverse – from the modern fire towers of Baku, the luxurious Government House to medieval palaces and temples scattered throughout the country. The walled city of Baku combines elements of medieval and traditional Islamic Islamic styles. Europeans, attracted by the first oil boom in Baku in the 19th century, developed the Old Town with Baroque and Gothic architecture. And just like in other former socialist republics, for example, in Eastern Europe and the Balkans, you will come across endless apartment buildings typical of the 20th century.

The Caucasus marks the border of Eastern Europe and Western Asia and it is one of the most culturally and linguistically diverse places in the world. Within a short distance from Baku, you can go hiking in the Caucasus among the steep gorges and plains stretching far away. The variety of landscapes makes each trip a unique and gives you the ability to explore the vast natural beauty of Azerbaijan.

At present, Azerbaijan has 5 UNESCO World Heritage Sites. The walled city of Baku with the Shirvanshahs Palace and the Maiden’s Tower, the Gobustan Mining, Cultural, Landscape and Historical Center of Sheki with the Khan’s Palace. Each of these sites has its own historical significance.

Most traditional Azerbaijani sweets are popular at events and festivals, whereas fresh fruits are served as a sweet course after a home-cooked meal. Many Azerbaijani desserts contain natural ingredients such as honey, nuts and fresh dough to make intense flavors without overloading the sweetness. Like many other dishes of Azerbaijani cuisine, desserts can vary by regions. One of the most delicious sweets of the national Azerbaijani cuisine is shekbura. The composition of this amazing baking includes nuts, oriental spices and sugar. Shekerbura attracts attention for its unusual appearance, a figure, that is depicted on it, it’s ear of wheat. Pakhlava (or baklava) is a rich dessert made of thin pastry layered with honey and chopped nuts. Shekerbura represents the Moon, gogal – the Sun, and baklava – a star. The sweets are  baked for the Novruz Holiday.

Azerbaijan was the first Islamic country ever to declare itself a democratic and secular Republic. Now it is a secular country with Eastern traditions and Europeanizing culture. Azerbaijan’s openness is known in the Muslim world as the country where the first operas and theaters were opened. Many religious monuments of different religions have been preserved over the years. From ancient mosques to Christian churches such as St. Bartholomew’s Church in the Old town or the Zoroastrian fire Temple or Albanian churches that go back to the Middle Ages.

Caucasus Mountains stretch across the northern part of Azerbaijan and Georgia. In the north, you can visit various historical and cultural villages. Guba is a favorite tourist destination. Neighboring communities, as Laza, Shinalik and Buduk, make interesting villages to visit to learn about the culture, almost completely lost to time. This region is also home to the Eastern Caucasus Mountain Jews.

İn Azerbaijan, 1847, was drilled the first oil well, three years before the United States. There is not much known Azerbaijanis, known all over the world, but one of the most interesting facts about Azerbaijan is the fact that the Nobel family, which financed the Nobel Prize, made their money from the extraction of Azerbaijani oil. You can visit their Museum. This is also the first house in Azerbaijan, where were installed air conditioners, formed as glacier ice in Norway, and a telephone line.

Azerbaijan is one of the 10 safest countries in the world. There is almost no street crime; the streets are clean and tidy. In Azerbaijan, you can freely take photos and videos; the exception is the subway (this will require written permission from the leadership). If a tourist wants to photograph a stranger, kindly ask permission.

Although Azerbaijan is not known as a center of luxury services, you will still find numerous boutiques, restaurants and VIP service establishments. Baku, Gabala and Shahdag have a good selection of luxury hotels and gourmet restaurants. The main currency for tourists is US dollars. You can also freely use online services and various plastic cards. Azerbaijan is a modern digital country with a developed infrastructure.

Why You Should Visit The Caucasus?